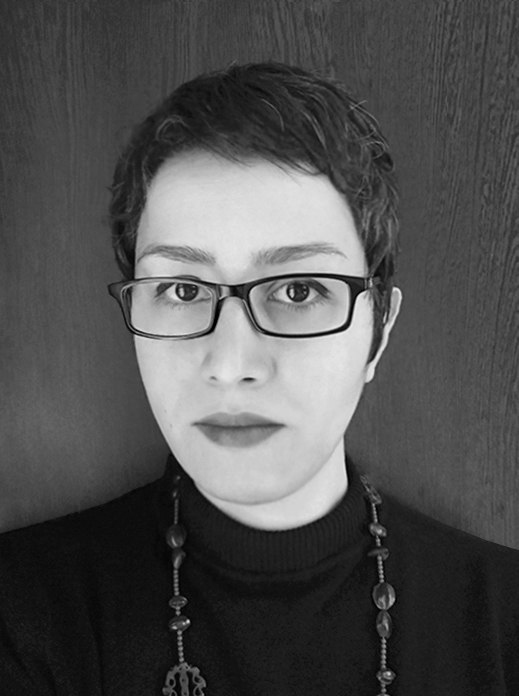 Elnaz Seyed Farshchi is an Iranian calligrapher and a graphic designer. Her works explore a modern theme as she blends traditional motifs and Islamic patterns with calligraphy and culture. She combines poetic calligraphy with simple colors and elegant compositions, disclosing the beauty of the Persian language. She is also an amateur sculptor and a supervisor of the printing process in Parchin Studio which is an advertising company in Tehran. She has been a member of the Iranian Graphic Designers Society since 2013. She also was a founding member of Airsa Visual Arts NGO.

Farshchi was born in Mashhad, and she grew up in Tehran, Iran where she lived and worked until she was thirty-five years old. She graduated in 2001 from the School of Fine Arts in Tehran, majoring in graphic design. She went on to get a second degree and majored in digital graphic design from Shariati University in Tehran and achieved a BA degree in 2010. From graduating until 2014, she was the senior designer and editor of the visual section of Parchin Studio. Over the years, Elnaz S. Farshchi has worked on several publications and advertising projects. She has thrown many exhibitions in a variety of fields of arts such as photography, calligraphy, graphic design, and visual art.

It has been four years since she left her country to boost her skills and talents in media art. Since 2017 she has lived and worked in Toulouse, France. Her artworks are strongly influenced by her experience of the condition of social restrictions and severe censorship in contemporary art in Iran and her concern in adapting to the new environment, culture and society of France. Entitled “Le Passage”, her latest project was displayed at Toulouse University in 2021 and it involved working directly with image and sound to tell a story that engages viewers with the speechless communication among human beings.

She is working on a sensory and poetic installation, which is a combination of colored lights and Iranian calligraphy. The goal is to feature an Iranian ancient art that is less used in the modern world by using the light on the calligraphic 3D sculpture and the narration of a mystical poem by the world-known Iranian poet Rumi, in connection with the Sama (whirling dervishes) dance and its mysticism that is called Sufism. Her medium and her style is the connection between light and shadow. She believes that the power of her installation is in the silence of the words.

Get to Know me better or let’s get in touch!